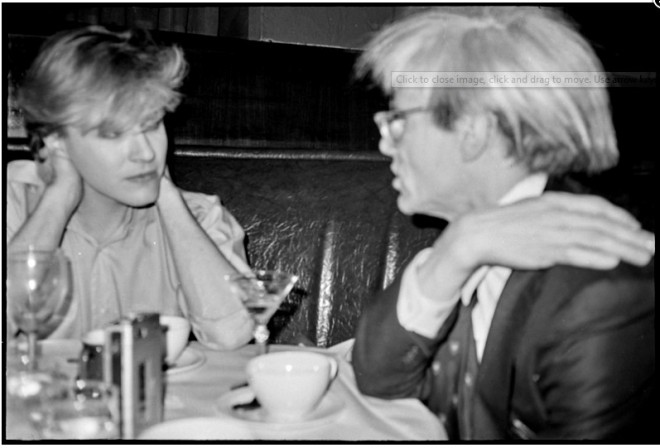 (Author’s note :  I’ve been a ‘fan’ of Warhol and his work for almost as long as I have been of Sylvian and his work.  So I was always intrigued by any connection between them.  For a short period in 1980 Sylvian roughly approximated two looks from Warhol : The Bold ‘Two Tone’ hair with the battered brown leather jacket.  (Circa Warhol 1974). Then there was the tortoise shell glasses and suit jacket look, which in his autobiography, Mick Karn says Sylvian saw Warhol wearing on the cover of a magazine during their holiday in NYC, 1979. Sylvian wore both well and the affectation was short lived. 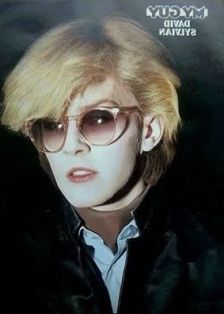 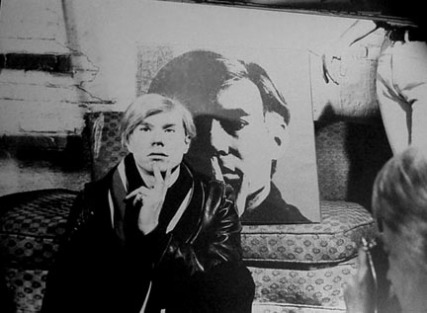 Sylvian also cited Warhol’s excellent ‘Autobiography’, ‘A to B and back again, the philosophy of Andy Warhol‘ as his ‘favourite’ book during interviews in the early 80’s. Warhol’s influence on Sylvian’s work and persona during this period are harder to quantify. The two would finally meet in NYC in early 1982.  I was elated to find contact sheets of their night out together in Warhol’s late work.

Regarding Sylvian’s visit to the Factory and his appearance on both Warhol’s cable TV show and in Interview magazine. (Mentioned in the excerpt below.) The former never aired and the latter never ran. (Sylvian wouldn’t appear in Interview magazine until 1988.) Sylvian’s appearance on MTV, filmed during that same trip has yet to surface. However, video footage of Sylvian by Warhol does exist.  The Warhol foundation told me :

“I’ve checked our database and files regarding David Sylvian. He appeared on an unfinished episode (# 19) Andy Warhol’s T.V. from 1982. Our database shows that there is a camera original tape labeled “Japan” that is 15 minutes in length which is the master tape containing the footage that would have been used for the show. The tape has not been preserved / restored so it is unavailable for viewing at this time.

The camera original tape I mentioned in my previous eMail does not have a date but the edited master of the finished show in which some of the material appears is dated May 1982. Here is what is written on the tape:

This tape would need to be sent out for preservation work before it could be viewed. The edited but never broadcast 19th episode of Andy Warhol’s T.V. is available for viewing but not outside of the museum at this time.”

While a diary entry of Warhol’s meeting with Sylvian probably does exist it is not published.  (Those dates are skipped in the book.))

By the spring of ’82 America had once again taken an interest. For the first time since ‘Life in Tokyo’, Japan had a licensing deal in the US with CBS/Epic. That March they released a compilation entitled simply Japan, comprising songs from both Gentlemen take Polaroids and Tin Drum. In addition, a flexi-disc featuring ‘Life Without Buildings’ – hardly Japan’s most commercial sounding track, although perhaps that was the point – was given away free with Trouser Press magazine. Although Sylvian was offended by the Frankenstein approach the American album employed, he took the opportunity of a trip to New York to promote the release. He would go so far as to dismiss the album release in an interview with Trouser Press: ‘I’m not happy with it,’ he said, ‘I didn’t like the idea of splitting up two albums.’ At this point, some were still hoping that Japan would tour the US and that Tin Drum would earn a domestic release there, but neither would ever happen. Sylvian himself must have known that the group had no long-term future and such a trip, which he took with his manager and Fujii, was more akin to a short holiday. ‘Number one albums and hits in the States . . .’ Sylvian would reflect a few years on, ‘these things already seemed unimportant when Japan split up; I’d already lost that.’

Sylvian was chaperoned in New York by Susan Blond, one time Warhol ‘Superstar; and by now head of CBS. Aside from an awkward interview on MTV and some low-key magazine interviews (Japan would never be accepted by Rolling Stone magazine), her first remit was to introduce Sylvian to his long-term hero, Andy Warhol. ‘I remember David because he was so attractive and also a real artist,’ recalls Blond, ‘so I knew Andy would love him. Anyone I liked I would take down to the Factory, which was then at 860 Broadway. I believe David had his girlfriend with him. He was very beautiful at that point in time and Andy was smitten with him. In fact Andy would have always wanted to look like David. Andy was never really good-looking, but so wanted to be.’ Warhol filmed Sylvian wandering around the Factory and interviewed him for his cable TV show although the material was never broadcast, and resides in the Warhol archive in Pittsburgh. Sylvian and Warhol, along with Yuka Fujii and various friends of Warhol would share a happy evening in NYC on April the 23rd and Sylvian was not disappointed by the encounter. 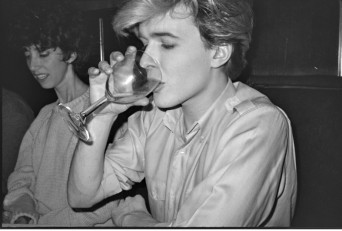 ‘I met him recently in New York,’ he would recall a few weeks later, ‘when I did an interview for Interview magazine, plus an interview for Andy’s cable TV show. You know that image he portrays, that of banality, like going along with everything that you say, everything’s great and wonderful? Well, he’s not really like that, you can tell that there’s something deeper than that. Most people have the impression that he doesn’t speak very much, that he just responds to people’s questions in that “Yeah, great” manner, but really he talks quite a lot and he’s a very interesting person.’ The two artificial blonds got on to the extent that a musical collaboration was planned although, like a similar venture planned with fellow New York resident Quentin Crisp, nothing would come of it. Warhol would shed some light on this a few years down the line in an interview with The Face magazine:

The Face: ‘Are you still working on some lyrics for the group Japan or did that all fall through?’

Warhol: ‘Oh, what is his name? David something.’

Warhol: ‘Yeah, oh, what happened to him?’

The Face: ‘He hasn’t done very much for ages.’

Warhol: ‘Oh really, why? He was so cute. God, he was so cute. I really liked him a lot. He’s not doing anything? Why not? Does he wear make-up?’

The Face: ‘God, yes, he wears tons! What did happen to the lyrics?’

Warhol: ‘Well, because he went back to England and then he went to Japan, it was sort of hard for us to get together. Anyway, it was only going to be one line.’

The Face: ‘What was the line?’

Warhol: ‘That’s what we were having trouble deciding.’

(Please note. The photos above do not appear in the book.)

You can order the book  here Japan Biography.