You have to wonder how each artist feels at the enforced meet and greet in this age of ‘VIP’ tickets.

For a few extra quid the punter gets a branded tote bag of goodies, a good seat and five minutes to nibble peanuts and gulp wine with their heroes in an awkward pre- gig rendezvous backstage.

Each artist gets the audience they deserve and one ponders at Will Sergeant and Ian McCulloch being called from their inner sanctum to shake hands and wag chins with a parade of boozed up middle aged men in Mod suits and feather-cuts, and women dressing for one night only as they did back in 1983. (And why not)?

Do they see an alternative reality in this awkward parade? A life they escaped in another age, one that could still befall them if ticket sales ever dried up?

Not that that seems likely tonight. This 2000 seater venue is full and the punters resent being seated.

The Bunnymen now are Mac and Will with a backing band. And it works. The two original Bunnymen have been everywhere and maybe seen too much of not enough in their 30 Odd year odd career but the drummer, rhythm guitarist – at least two decades younger – are still star shaped at this trip, the drummer in particular playing as if our lives depended on it. The keyboardist and bassist are competent and slightly more worn but together it’s a good combination, hot in the basement, median in the middle and icy and imperial on top.

Will – heavy but well dressed and with great hair- is still the guitar scientist in love with his instrument. Mac – thinned down after a couple of years of bloat looks long and regal, focused and game and compared to the last time I saw him in his solo show- cool and sober  – although it’s wrong to see him denied his Marlboro.

‘Going up’ from 1980 begins the show (although it could have been written at any time after that) –and the sound is heavy and clear, Mac’s voice is worn but still impressive, like a battered, mighty Chesterfield in a neglected stately home. On cue the loaded fans directly in front of me…get up. One gangling chap, dressed like The Joker, shades on, Renaissance hair dyed blue black begins his own one man festival in the aisle. He’s rushed by gentle security. Handled back to his seat among protests from his neighbours. He continues to groove in his seat occasionally Jack in the box leaping to his feet and pointing at an invisible sky.

Between songs, Mac invites the audience to Dance. Cue ‘Rescue’ a fistful do just that, bobbing in their seats, rushing the front of the stage, clogging the aisles. This brings in more security. ‘They won’t let us dance, Mac’! Shouts one forlorn forklift driver from Newport.

A subdued but amused Mac gently addressed the security : ‘Come on mate, it’s a concert…’

Security looks confused. The man in the Joker suits wiggles his hands while pointing at the ceiling.

The band power on. 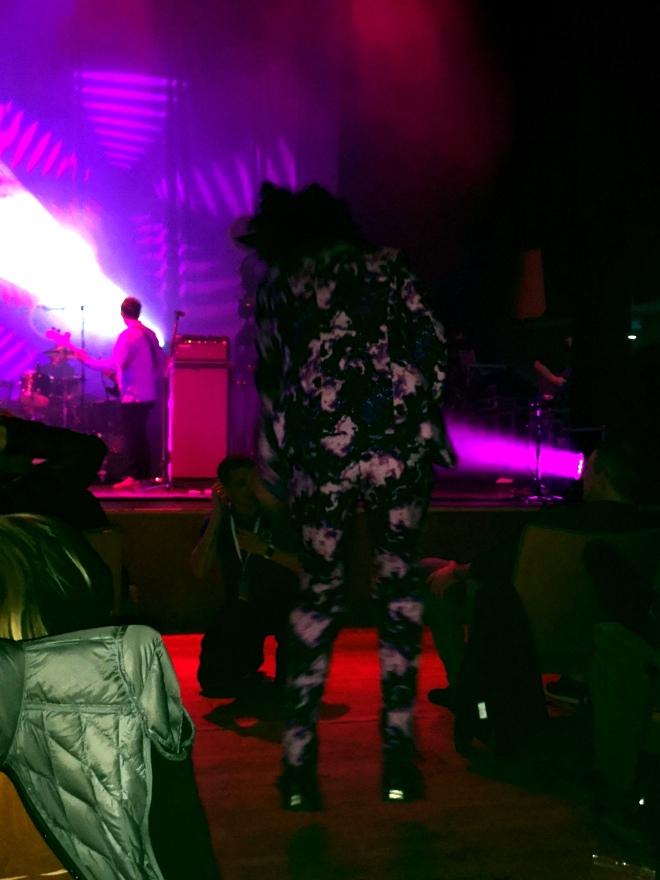 ‘Over the wall’ is astounding. The drum machine makes the song macro. When the real drums come in on the chorus we are widescreen and massive. Its epic, death valley stuff, reeking of stadiums and ballparks but the Bunnymen were never blank enough to be U2…

The mania slips a little mid set. ‘Nothing lasts for ever’ isn’t greeted like the great ‘comeback’ single it was and to me still sounds more like a solo McCulloch song with Will unsure of where his place in it is. During this and ‘Rust’ – sounding like a massive hit that never was – more Neil Diamond than Diamond White- most of the boozy blokes head for the bar. 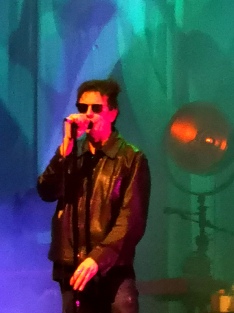 ‘Never stop’ brings on another onslaught. It’s like the Somme out there. And the jigging men and women, addled by lager and age, debt and divorce, loss and disappointment (like most of us) now confounding the sober security with their ad-hoc dance moves are right to do so. This is music that demands full physical expression, not polite nodding and finger tapping. As the security manhandle people back to their seats someone shouts ‘Have you got Bupa, Mac’?  ‘Have I got Bupa?’ retorts the singer. ‘Eh’? As Bowie said in the opening scene of Just a Gigolo ‘Get your own Pig’!’ There follows a rambling but accurate assessment by Mac of said film and director David Hemmings.

By now the man in the Joker suit and his beau have given up and leave.

Bad timing. There’s a temporary lull but by the time of ‘Lips like sugar’ the audience have won and the security have given up. The crowd are crowding the front of the stage, throwing shapes and spilling cider and at last everything is in place. Me and my partner vacate our seats and head for the top stalls. Going up we pass the Joker and his Girl, drinking forlornly and alone at the bar while behind the doors the venue goes ga- ga. Maybe some people want to be the only ones seen dancing. 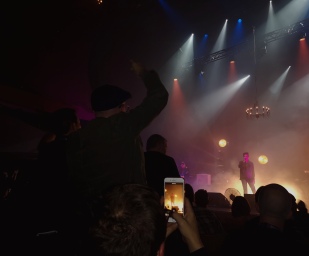 The timeless majesty of ‘The Killing Moon’ ends the night. At last it allows the audience to connect with a Golden summer a lifetime before Mortgages and male pattern baldness… but it also connects us with something much more eternal…something that’s impossible to put into words outside of a song. 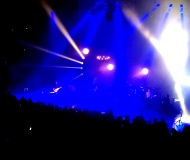 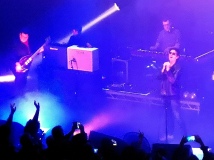